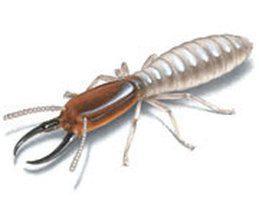 The eastern subterranean termite is the most damaging urban pest, costing more than $1 billion annually for control and repair to damaged structures. When this damage becomes evident, it is usually the result of a few years of infestation. Although damage by termites is a serious problem it is not a sudden onslaught that will cause a building to collapse in a few days.

Generally, the first indirect sign of infestation is fecal pellets or the presence of alates on windowsills or near lights. Alates are the winged form of the eastern subterranean termite, commonly called a swarmer. If they are found inside a home with closed windows and doors, this can be an indication of infestation within the structure. Another indication is the presence of discarded wings near emergence sites, on windowsills, or caught up in cobwebs. However, the presence of alates outdoors is a natural phenomenon and is not a direct sign that your home is infested with termites.

Difficulty in controlling termites is largely due to their social nature of living in colonies containing up to one million members that are usually located in the soil and comprised of three groups: workers, soldiers, and reproductives. The queen, who never leaves the nest, and males (primary reproductives) are colored dark-brown or black and are about 3/8 to 1/2 inches long. Workers have chewing mouthparts and are the ones who cause all the damage in wooden structures as they feed along the grain in the soft portion of the wood and create galleries lined with muddy fecal material (a large colony can eat about a pound of wood a day!). They are completely cream-colored, soft-bodied, can survive up to five years, and are blind. The workers are the most numerous group with 60,000 to 5 million in a given colony. These workers also forage for food up to 230 feet away from the colony, tend eggs, young, and reproductives, and build tubes. Still, however, workers are seldom seen unless a tube or infested wood is broken open. In this case, the soliders come to defend the breached area. Soldiers have rectangular, brownish heads and cream-colored abdomens but they only make up 1 - 3% of the foraging termite population. They have smooth mandibles that protrude from the front of the head and are specialized to defend the colony. However, the position of the mandibles makes it impossible for soldiers to feed themselves so they are fed by workers. Alates, the winged forms, are brownish-black with wings. They are attracted to light, and when they emerge within buildings, they swarm about doors and windows.